Around 80 words casually stolen from poems, literary phrases, everyday images and personal stories. Words entrusted haphazardly to a computer program that remixes them and combines them in pairs. Amongst the couples of terms proposed by the computer, a group of young dancers-choreographers, unsure about what name to give the company they were founding, chose an association with an esotic and somewhat mysterious ring to it: Sosta Palmizi. It was 1984, and out of the breaking up of the Carolyn Carson La Fenice Dance Theatre, a company that would have one of the most important impacts on the history and development of the Italian Contemporary choreography scene, Sosta Palmizi came into being.

The group was made up of Michele Abbondanza, Francesca Bertolli, Roberto Castello, Roberto Cocconi, Raffaella Giordano and Giorgio Rossi. In a short time together they created and performed Il Cortile a pivotal point in the first generation of Italian contemporary dance choreography, and still today a symbol of an original form of dancetheatre governed by a primitive form of movement that is an expression of contemporary life.

A number of years ago Giorgio Rossi told us, “there were unspoken things between us that didn’t need explanations. We were quite simply convinced of what we were doing. We wanted to speak, recount, bring out our madness, our hidden selves: and dance overlapped into theatre.” A work that was born from the elaboration and assembly of material accumulated through the improvisation of six individual choreographers-interpreters, Il Cortile was the fruit of a “collective” mode of creation, as positive as it was complex to develop. It is not coincidence that this same experiment was used on only two more occasions: the ritual Tufo of 1986 and Perduti una Notte a delicate trio of 1989 with Castello, Giordano and Rossi. It was inevitable that the collective adventure, at least from the creative point of view, couldn’t continue indefinitely. Carolyn Carlson’s ex offspring had grown up and, little by little, were creating the direction and nature of their individual research.[…]”

This work tells the story, in an abstract sense, of 6 days in the life of a group of disaster survivors, inside a courtyard. The floor is covered with earth, and the minimal scenery gives a sense of extreme poverty and a sort of madness pervades the whole scene.

This unusual situation allows for the acting out of absurd, surreal and at times dramatic behaviour…the courtyard is an arbitrary external and internal boundry and is the pretext that allows a glimpse into an internal existence, a train of consciousness between reality and the absurd.

The Courtyard is the group’s first collective experience. The work was created in Montepulciano which hosts the International Center of Art of Montepulciano, and reflects the nature and atmosphere of the place where it was created. The rain, the mud and the constant difficulties of those months of work were a determining influence on the day by day psychology of the creative process…a very objective work, in the third person, that invites one to observe and not to identify with it…but the center of this work, in the third person, burns, communicates something profoundly personal and real: it is not a confession, but rather an honest expression of personality, of a condition.

“A beautifully fabricated work. An hour of performance that races, a parade of emotions, situations, movements concentrated in the claustrophobic and depressing space of a courtyard without time. Closed within walls created by hanging laundry, a cage without bars that opens in front of the spectators ‘eyes to let the performers come in and out reduced to the level of domestic animals in a courtyard.”

“Sosta Palmizi is Carolyn Carlson’s goodbye gift to Italy. In the forefront of the new dance phenomenon, it was created from the roots of the lagoon and a desire to move the overly quiet waters of a contemporary dance scene that was marginal, acquired and petrified. The Courtyard of 1985 is the first collective production of a “poor” work in the sense of “poor art” completely focused on a powerfully emotional and expressive mood: it is no longer “Carlsonian”; a new realistic and wild style has come into being, neither abstract nor concrete; perhaps alluding to stories that each spectator can perceive and develop as he pleases. Apart from anything else the courtyard presents multiple characters making it complicated to manage on an artistic level. Each of the dancers has his or her own personality, type, style, which has to find a place and balance within the group’s collective work. This cannot be solely the sum of the improvisations produced by each performer. “ 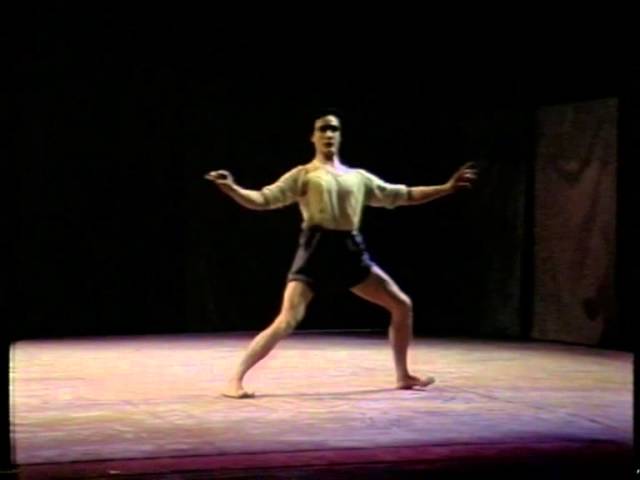 A curved surface, an area of abandoned land, inhabited and crossed by unknown travelers. A place to take refuge in moments of excess, a place to traverse, to take away, to trample, and smell. Space and time unable to reveal themselves, but illuminated by the colour of the eyes that observe. In this small stretch of land that absorbs and contains every odour, once again fragments unite and become stratified. Everyone’s emotions depict the way.

“Tufo displays pofessionalism, the ability to concentrate and a seriousness of intent. Above all it shows how these young artists…have been able to elaborate their own working method, their own technique and, as a consequence, their own language…they sought new “seeds” in the world’s most ancient dimension: the primordial…a return to origins as a critical analysis of contemporary reality.”

“The scenery is minimal: a flat surface, a circular shape, a structure in the background. The performers establish ties, a fraught complicity in a game where space and time are brutalized, suspended, lengthened; superimpositions, journies, parallel paths, divisions emerge. However, the work unfolds in a linear fashion, aiming at a sort of abstract unity, while the spectator follows the mood, the fine thread that necessarily ties things together. Energy, as a pure force, dictates the rhythm…Precarious relationships are established between the characters where poetic enchantments are merely confused moments in the eruption of frictions that are also fleeting: as though the desire were to underline the volatility of emotions in an inexorably chaotic world. In a setting populated by shadows the five performers enact their disturbing ritual in perfect harmony and in an already mature choreographic language that is wholly theirs and no longer owes anything to any master.”

“There is a perversely infantile animality that emanates from their primeval existences…with a devotion of a sacred nature that looks towards a rugged and harsh orient, tending towards an increasing dissolution of energy, until it reaches a dance that attains verticality in an alternation of encounters and sublime duets dense with stories and implicit memories.” 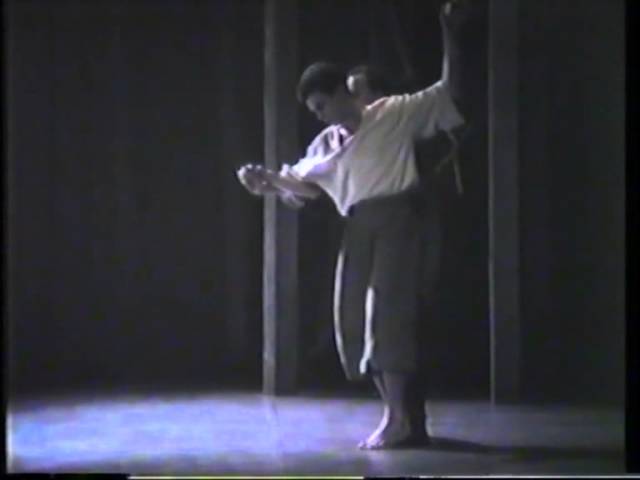 For many years nobody had come back and no one knew where they were, everything was partially lost in obscurity, smells of antiquity, of complicated lives, ongoing intrigues.
Something fleeting, out of reach.
There were two of them, someone, a thought, a moment earlier. As though binding a book that had lost its pages. Reconstruct a story from missing pieces.
As though it were always too late, bizarre women and men come to mind, made out of rags, the real indistinguishable from the false. A subtle pleasure for whoever enjoys creating confusion, hidden witnesses of a confused love.

“.. This subtlely fascinating work is an accumulation of visual, gestual, and musical “leit motiv” that slowly insinuates itself into the soul and little by little draws the spectator into a retro and demode’ world and once again affirms the exceptional creative ability of this historic group… fragments of stories of the ‘30’s emerge, characters from films with white telephones, grotesque and stylized tangos, disguises, a comical flamenco, laughter, incomprehensible babbling. The piece danced solely to the rhythm of forced breathing and the continuous beat of feet is extraordinary.””.

“Perduti una notte” is another occasion to appreciate the concrete intensity, refined atmosphere, a sense of a story combined with a dense choreographic performance…it expresses fragmentation and deflagration on the one hand and on the other the harmony of great narrative motion without a story.”

“Perduti una notte” is a significant step forward in the poetic development of the group. The spectator cancels the impression of bundled up, dusty and ragged bodies, in which for a number of years Sosta, in various forms, were engaged, and enriches the movement, as usual full of gags and mimed alienation, with a series of airy and poetic steps and fluctuations. The narrative is simple and evolves from the title: on a tragic night, three enigmatic characters get lost in an abandoned theater. It is an occasion for retrieving lost fragments and memories. Indecipherable personal memories, performances, and past performances, merge with literary ecstasies and ironical incursions into melodrama.”