“One day in a distant time when it was easy to meet a skiapods or a blemmo, when geese or children were born from the trees making wak wak, two identical and opposite girls were born from the same tree. The first fell on the ground, the second into the water; the current dragged her away. From distant places and opposite beaches they heard each other’s calls. In the depths of their memory was enclosed the road to follow.
Beyond the frontiers that separate cities from dreams, following the geography of their desires, the two girls set off towards each other. Crossing unknown and mysterious places that are always on the other side of the world, where borders are blurred and you can move them as you advance. The two little girls proceeded by listening, seeing what others no longer know how to see… headwords, skiapods or trees from which children are born who, falling down, make wak wak”.

The show stages the story of two sisters who are born from the flowers of the same tree, but as one falls to the ground and the other into the water they find themselves separated by birth and end up one in the East and the other in the West.
However, they immediately embark on a long journey in search of each other; a journey to find the other herself, the part missing from her own happiness.
In their journey they will come into contact with unknown places, songs and dances of different peoples, but above all they will meet monsters of the strangest shapes, monsters that show, point the finger in one direction, teach.

The girls will risk losing the right direction but their feeling will be so strong that they will find themselves close to each other, until they mirror each other’s faces without fear, but with the joy of completeness.

And they will find themselves on the island of monsters that disappear and reappear, that sail and sink like a giant fish in the four corners of the earth.

The secret to meeting ghosts is innocence. Taken as we are by the god money from the pursuit of form and reputation, our heart blurs and loses purity. If we get rid of such chains and look at our surroundings with different eyes, then even supernatural details will appear to us that we would not even have imagined existed before. Yet human beings have possessed this peculiarity in their intellect since their birth.

A performance of dance, singing and music. The characters on stage speak exclusively with their bodies and through the sounds they emit with the help of original musical instruments. They also use the tree, on which images of the worlds visited by the two protagonists, monsters and other bizarre creatures, are projected, in a continuous dialogue with the performers on stage between body and figure, song and dance. Our creative work is inspired by the dances and folk songs of the various countries that the girls go through in the story. Through the vocal loop station we create live sound carpets and songs. With the collaboration of body music performer Simone Mongelli we deepen the technique of body percussion to create a rhythmic and physical language that allows the two girls, even if far away, to communicate feeling each other’s sounds, until creating real danced melodies.

Other productions by Cecilia Ventriglia 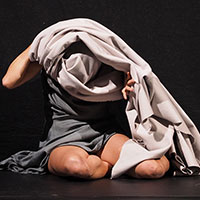 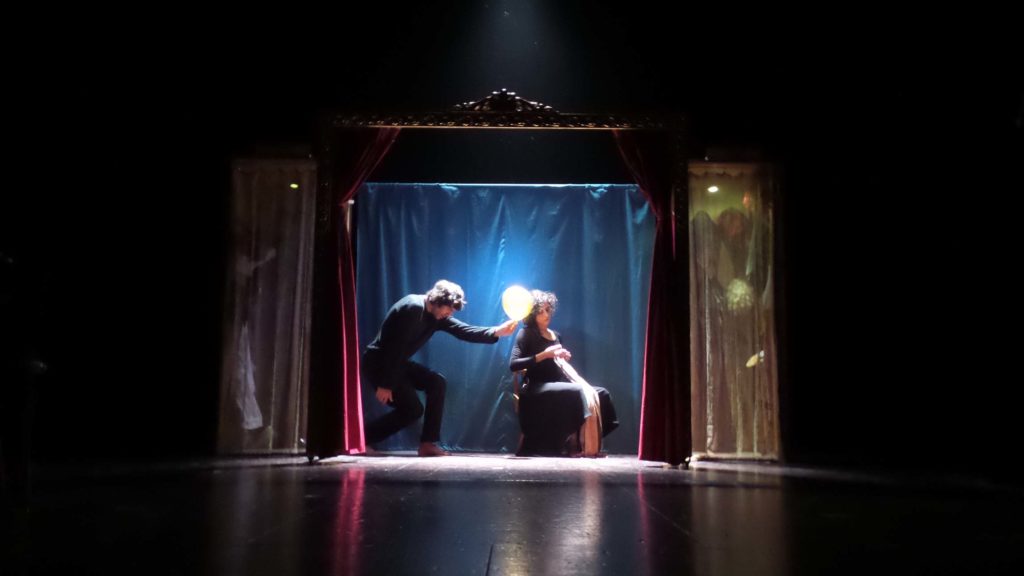