Like naked trees
alive from one hand to the other
with eyes open‚ surprised
from pleasure‚ modesty‚ shame.
I think of the look‚ mute
moved to take in for an instant
our passing of men‚ beyond any belonging.

Men circumscribed in a time‚ in a body‚
disguised‚ unsuspicious.
Carriers beneath their disguise
of a mistery; touched by the desire
and the fear of returning to
their state of having been
children‚ wounded under the eyes of all.

I watch man’s activity in the creation of his work, I see him so broken, I see his work so broken. On the stage, actions like exploded fragments start to take shape, elements that refer to disparate meanings.
The author of the work re-finds their roots, compresses meanings in a unified organism on the boards of the stage. He weaves actions that are born even before they have been understood. The ancient story of Christ appears in its principle episodes: birth, preaching, sacrifice, crucifixion,
but in the theatrical synthesis everything is transfigured.
The story – myth of Christ is saturated with contemporary myths and images evolve in this superimposition that recall expressionist painting. The dance of agony of the black swan foretells dark omens on the life of Christ and his people, as did the Angel Gabriel.
The innocents killed in Herod’s massacre return grown-up, victims and at the same time butchers, Herod is a transvestite…Rome of the lions…the arenas…
The task of portraying the tragedy is entrusted to a group of young people with childlike faces, candid witnesses to the horror created by class struggles, by wealth, by poverty, by possessions.
Danio Manfredini

“I beg you, you are like those soldiers,
The youngest of those soldiers,
who were the first to enter
beyond the barbed-wire of a concentration camp…
and their eyes…Ah, I beg you,
be young like them”.
(P.P.Pasolini) 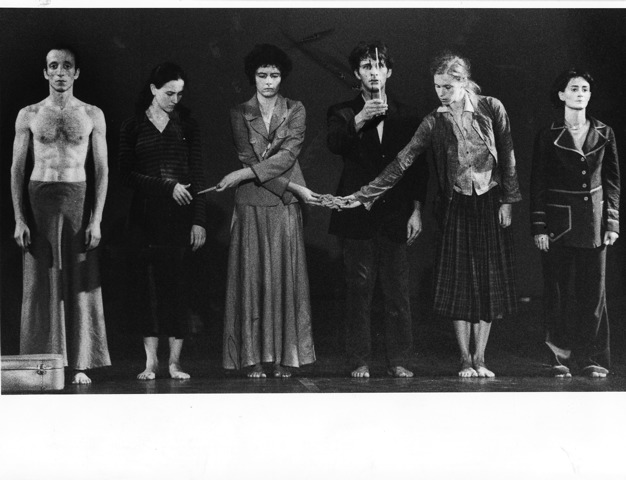