Born in Verona in 1984. She graduated in Scenography at the Academy of Fine Arts in Venice. In 2009 she met Raffaella Giordano and began the two-year training course “Scritture per la Danza Contemporanea” at the end of which, together with 11 other artists of the same two-year period, she founded the research group on the movement “FamigliaFuchè” Other important figures for her work are still Ang Gey Pin, Maria Munoz, Claude Coldy, Cinzia De Lorenzi, Silvia Rampelli, Dominique Dupuy. Since 2010 she started her collaboration with Teatro Valdoca, working as dancer in the show “Caino”, in the project “Cage Parade”, and in the second part of the Trilogy of Joy “Ora non hai più paura” (debut January 2013). In 2011 with Chiara Orefice and Sveva Scognamiglio she began her study for the creation of “Elles sont partout” and a personal path of her own working on her first dance solo “Raku”.
(winner of the GD’A Veneto Award 2012). 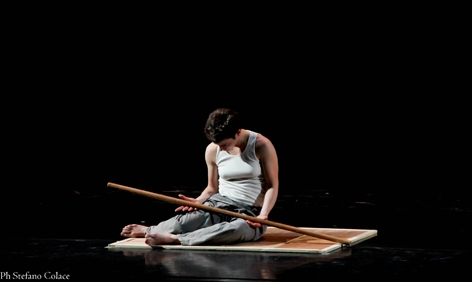