I Nuovi Scalzi, a company of young artists from Puglia, in collaboration with the dancer Anna Moscatelli and under the watchful eye of Giorgio Rossi have created a project aimed at childhood, the discovery of the Universe and dance that led to the creation of the show “Costellazioni. Pronti, partenza…Spazio!” suitable for all children from 4 to 99 years old. A common idea has encouraged the collaboration between I Nuovi Scalzi and Sosta Palmizi – in particular Giorgio Rossi, in the field of educational activities and awareness raising aimed at young people, in order to spread the culture of contemporary dance, physical principles and body expressiveness.

Savino Italiano
He has been passionate about theatre since 2003 following Michele D’Errico’s theatre workshops. He deepens the theatrical languages and techniques with the method of A. Vasil’ev with Daniele Nuccetelli, Maurizio Lucà, Monica Samassa, Giovanni Guardiano, Svetlana Kevral. In 2006 he began his study of the techniques of the Commedia dell’Arte mask, first as a self-taught artist and then, in 2007, with Maestro Claudio De Maglio. The artistic research and deepening of the non-verbal language continues through the study of clowns with Gonzalo Alarcon, mime with Michele Monetta, contemporary dance with dancers and choreographers such as Marigia Maggipinto, Diana Damiani, Pilobolus, Michele Abbondanza (Abbondanza Bertoni company), Collettivo Explorer, Giorgio Rossi (Sosta Palmizi). Other masters with whom he followed workshops and in-depth studies are Carlo Boso (Comedy), Memo Dini (acrobatics), Leonardo Petrillo (Comedy), Bruno Lomele (stage weapons) and others. In the role of Pantalone and director (with the supervision of Claudio De Maglio) for the show La Ridiculosa commedia della terra contesa he won several awards including Best Production 2015 in the 7th International Festival of Mont Laurier (Canada). Since 2014, he has also been training in the field of theatrical pedagogy and has held several workshops on the techniques of Commedia dell’Arte. He currently works with the company I Nuovi Scalzi in Italy and abroad and collaborates with other companies

Olga Mascolo
Performer, graduated in Performing Arts and Techniques, master’s degree at the University La Sapienza of Rome. She continues to train through workshops and laboratories in dance theatre, Commedia dell’Arte, contemporary dance. She also deals with juggling with fire and expressive workshops for children. She continued her studies in the theatrical field of lighting engineering and lighting design, thanks to the course of the Puglia Region at | Car Formazione e Sviluppo O.N.L.U.S., Andria (2014-2015). She is founder of the company I Nuovi Scalzi, with which she has received several international awards including Best Production 2015 – Mont Laurier, Canada . She collaborates with the company La Luna Nel Letto as technical assistant and actress in the show L’Abito Nuovo; Collettivo Explorer/Giovinazzo; La Settimana Dopo/Roma; Barchetta Blu/Venezia. 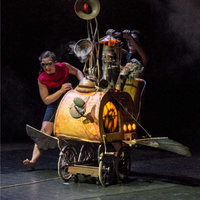